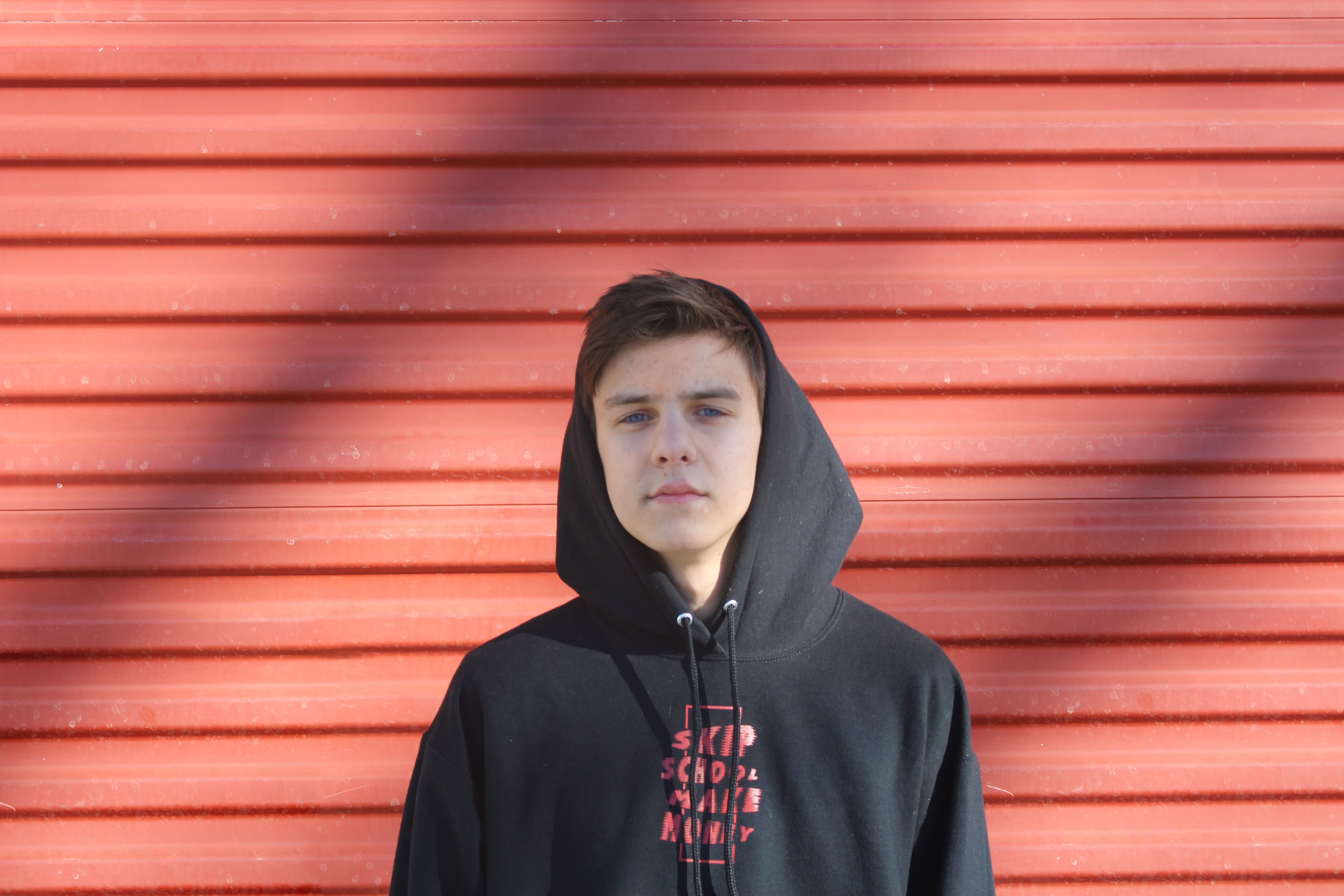 Stephen Klagholz was an active and athletic elementary school kid when his eating disorder took root. His interests gravitated toward fitness and nutrition, and his increasingly intense preoccupation with his body and food was supported — even admired — by those around him.

Klagholz says that consequently, his entire adolescence was spent “honing eating disorder behavior and worsening my body image,” but his problematic thoughts and behaviors were easy to mask. On the surface, he seemed like a dedicated athlete, pursuing a “healthy” lifestyle. While our society may be starting to recognize the warning signs of eating disorders across groups, during Klagholz’s formative years, being a boy meant his eating disorder would slip through the cracks of care.

“It wasn’t until I was a sophomore in high school, when I was already years deep into restrictive dieting and over-exercising, that I was diagnosed with anorexia,” Klagholz says. It took until sophomore year of college for Klagholz to be admitted to an inpatient program.

“The masculine ideals around me were both fuel for my eating disorder and a diversion for others who couldn’t recognize that I was dealing with a deadly illness,” he says. “Over 20 years later, I still encounter people, including health care professionals, who perpetuate the stereotype that eating disorders only affect women.”

While we’ve made strides in understanding that these diseases don’t discriminate, there is still rampant misinformation surrounding eating disorder diagnoses in boys and men. So why are so many individuals who identify as male not receiving the care they deserve — and what can we do to change the landscape of diagnosis and treatment?

How many boys and men suffer from eating disorders?

Before diving into the statistics, it’s important to recognize the nuances around gender, sex, and identity. The social pressures, media influences, and body image ideals that burden gay men, trans men, and nonbinary folks may vary from those that impact cisgendered, heterosexual men. But while eating disorders can manifest for different reasons and present in a multitude of ways, the overarching reality is that individuals who identify as boys and men are simply not receiving adequate care.

“Often, the men I work with are ashamed and guilty about struggling with an eating disorder. And while those feelings of guilt and shame are common, boys and men are generally taught to hide their emotions because expressing an emotion that is not anger is a sign of weakness. These extra layers of self-criticism can heighten the obstacles to recovery and help-seeking behaviors,” says Equip therapist Jonathan Levine, MSW, LCSW.

Klagholz says that he knows he’s not alone as a man who has struggled with an eating disorder. “I’ve been in sports my whole life and worked professionally in fitness for close to a decade,” he says. “I can say, without question, that I’ve encountered a significant number of men who exhibit extremely disordered behaviors around food, exercise, and body image. What I find most interesting is that there seems to be a strong level of  reinforcement of these behaviors and accompanying thought processes among men and within society. In my experience, competitiveness among men to be the healthiest, the fittest, or the most ripped abounds and has a huge impact on how men conduct and value themselves.”

Why boys and men aren’t getting proper treatment

With males accounting for a significant portion of people with eating disorders, why are health professionals letting so many of them slip through the cracks?  For one, eating disorders may not look quite the same across genders. “Body image concerns in boys and men often present a bit differently than in females and tend to be more focused on gaining muscle or getting ‘ripped’ rather than on thinness,” Hill says. “So my male patients with anorexia nervosa, for instance, are often going to the gym compulsively and eating a very restrictive diet, often limited in carbs and high in protein, and sometimes using muscle-building supplements or steroids.”

Another issue is that experts have long considered lack of menstruation — otherwise known as amenorrhea — one major criteria for diagnosing anorexia specifically. It wasn’t until the publication of the DSM-5 in 2013 that amenorrhea was removed from the mandatory list of diagnostic criteria. And while eating disorders like anorexia may present in more “traditional” ways in individuals who identify as female, eating disorders in boys and men may hide in plain sight as the “bulking and cutting” dietary technique popular in fitness, which involves alternating between periods of caloric surplus and restriction to increase muscle definition. Hill says that while girls and women tend to present with more straightforward eating disorder signs, like a lack of period or extreme weight loss, “the warning signs can be more subtle in boys and men. We’re much better at picking up on eating disorders in female patients because they tend to fit the stereotype.”

Another reason boys and men may not be getting the help they need is that, as Klagholz experienced, society often reveres a male obsession with fitness. “We often forget that boys and men are faced with unrealistic body ideals in popular and social media, just like girls and women are,” Hill says. “Male celebrities often go on extreme diet and exercise regimens for a movie role, for instance, and these behaviors are then mimicked by well-meaning boys and men. And our society praises these extreme behaviors as ‘healthy’ when in reality, they are anything but. Fortunately, some male actors like Zac Efron and Shawn Mendes are now speaking up about their own body image and health struggles.”

Another barrier to care may simply be that proper eating disorder care for men and boys can be hard to come by. Equip Patient Services Representative Kristen Davis says that when her son received an eating disorder diagnosis ten years ago, it was a challenge to find adequate care; unfortunately, a decade later, she still hears from other parents echoing the same frustration and desperation. “When my son was diagnosed with anorexia, it was almost impossible to find treatment for him, even though he was undernourished and hospitalized for his dire condition. We couldn't find a program, let alone one within our insurance coverage, to accept a male without a lot of challenge and perseverance,” she says.

Where do we go from here?

While the intricacies of eating disorders in boys and men are distinct in some ways, the continued lack of understanding and care for this population speaks to a broader issue: our society still has a long way to go in comprehending the complexities of these illnesses. Levine says that initiating and participating in frank conversations may help move the needle on progress. “Normalize all emotional experiences without judgment or criticism,” he says. “Challenge the hidden messages boys and men are shown in movies, TV, social media, and music when you see it. Lastly, stay curious! Curiosity is a powerful mechanism to challenge fear and support healing.”

Hill says the most important takeaways for parents and caretakers is that eating disorders affect everyone and there is nothing shameful about these mental illnesses occurring in their families. “If your son develops an eating disorder, the first thing I’d say is that despite how it may feel, you’re absolutely not alone,” she says. “Eating disorders are common in boys and men, and increasing in prevalence. The second thing I’d say is that it’s not your fault, your son’s fault, or anyone’s fault.”

Davis believes early intervention could start in the classroom if educators were properly informed and trained about the warning signs of eating disorders across demographics. “I can't state enough how important it is that schools become trained in eating disorders and how to identify students suffering,” she says. “As someone who worked in a school for 11 years, and a parent whose child deteriorated in front of our and his school's eyes, I know firsthand that there needs to be regular faculty training and a process in place to educate and help students.”

Now recovered, Klagholz believes social support and connection are essential — particularly in boys and men who may feel isolated in their experience. “Finding a male peer mentor with lived experience may not sound great to the person initially but, with the right connection, such a relationship can be extremely valuable,” he says.  This goes for family members, too. “Consciously challenging your own beliefs about eating disorders and possible stereotypes ingrained in your mind will be very important for anyone supporting a boy or male with an ED,” he says. “You should understand that your loved one may not exhibit all the ‘normal’ signs of an ED. Find a support group of other people with experience of a male loved one having an ED.”

And finally, Klagholz reiterates the undeniable impact a simple check-in can have on a loved one’s life. “Don’t risk it — one conversation can go a long way,” he says. “I urge people to simply be aware of the possibility that their male loved one might have an eating disorder. If there’s a concern, it should be talked about, investigated, and observed. ”