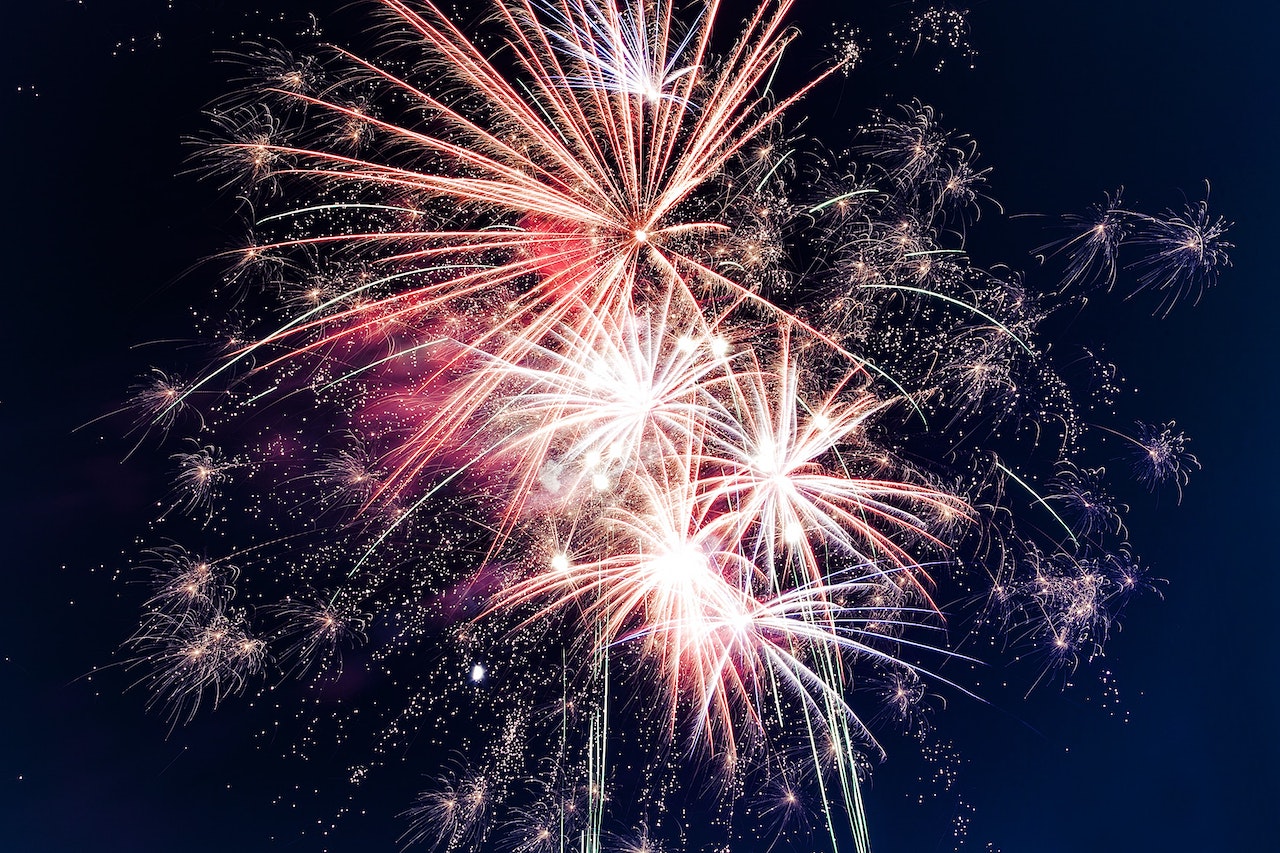 For many of us, the new year promises a fresh start, a clean slate, and an opportunity to finally, once and for all, nail that one specific goal that’s always been just out of reach. The problem, however, is that New Year’s resolutions typically aren't successful — in fact, according to one recent study, about 64% of people abandon their commitments within a month. What’s more, the vast majority of year-end goals are centered around diets, weight loss and fitness, which makes the whole resolution business particularly problematic for those in eating disorder recovery.

Considering the endless flood of “new year, new me!” messaging coming at us from every magazine cover, TV commercial, and social media post, it makes sense that so many of us are tempted to reinvent ourselves every January. But why are so many resolutions rooted in physical appearance — and how can we successfully strive for something more meaningful?

“It’s totally understandable in our current culture why, when we think about a time of change and transformation, we think about changing our bodies to be more ‘acceptable’ and ‘healthy,’” says Equip Therapist Kirstin Quinn Siegel, LMFT. “We have so many messages — constantly, every day — bombarding us with false ideas about health, body size, and what will make us happy.”

As Siegel explains, New Year’s resolutions are rooted in the near-universal, and completely natural desire to be accepted, healthy, and happy. The problem, she says, is that diet culture has co-opted and capitalized upon these very fundamental and basic human needs. “Diet culture tells us that thinner bodies are better in every way and larger bodies are potential projects to be changed and ‘transformed’ by any means necessary,” she says. This mindset is damaging for anyone with a body, but particularly for people living with an eating disorder or disordered eating.

Equip COO and co-founder Erin Parks, PhD, agrees that this time of year tends to be the sweet spot for commercial industries to push the message of physical reinvention, making their messages tough to resist. But the supposed promises they make to consumers about “feeling better” in the new year if they just lose weight/dye their hair/try a new supplement, etc. are also appealing for other reasons. “There are aspects of the holidays that can make us all feel a little bit out of control,” Parks says. “Sometimes we think we can control things that we really can't. Just like we can't control our height, we can't control our weight, and we can't control the fact that we're aging — and yet, we all try to convince ourselves that we can.”

The combination of our cultural obsession with annual transformation, the pervasive influence of diet culture, and the lack of control many of us feel after the winter holidays can create a perfect storm for setting unhealthy, image-based resolutions that ultimately fail and reinforce negative self-image. The good news is that it’s possible to reclaim the narrative around New Year’s resolutions, allowing everyone — including those in eating disorder recovery — to set goals that further their growth and happiness. Read on for the keys to successful resolution setting.

What constitutes a “healthy” resolution?

In a world where “clean” eating (whatever that means) and a “more-is-more” attitude about exercise are so widely interpreted as commitments to “wellness,” it can be tough to know what a “healthy” resolution actually entails. For starters, it helps to remember that “health” is not about a number on the scale or arbitrary body-based goals — it’s more about your mental, physical, and emotional well-being.

“A key aspect of a supportive resolution is that it comes from an intrinsic desire and is aligned with your values,” says Equip Peer Mentor Stacy Jones. “Having resolutions that are intrinsically driven means they are not about others seeing you a certain way, or about what you ‘should’ do. It is something truly for you that will support your most expansive and aligned life.”

As Parks puts it, no one should be “should”-ing themselves when setting their resolutions: “a healthy resolution is one that makes you happy when you think about doing it and — and doesn't make you feel guilty when you think about not doing it.” To her point, Parks picks a resolution each year that is based around learning a new skill or engaging in an activity she’s always wanted to try. One year it was knitting, another year it was surfing. “It’s not about changing myself — I certainly am not becoming a knitter or a surfer, but I wanted to have the experience of learning how to do something,” she says. “And if I hadn't followed through and didn’t actually learn to surf, I wouldn't have felt guilty about it.”

To prevent slipping into the “should” mentality — even when setting non-body-based goals — Siegel suggests interrogating the reason behind the resolution and asking yourself what purpose it serves. “Something else to consider is what would happen if you didn't meet your resolution,” she says. “When resolutions are coming from a place of anxiety or trying to ‘fix’ ourselves, there is often distress around the thought of not meeting it. Resolutions are not meant to be a way to shame and criticize yourself into change. When resolutions are driven by moving away from the parts of you that you dislike, they are not sustainable. Resolutions are a chance to set a focus and intention for the year, to plant a seed to guide you into living your life more fully.”

And while some resolutions may involve physical activities, sports, or movement, none of those things inherently have anything to do with appearance, weight, or moral value; it’s only when they skew toward these areas that they become problematic. As Equip Family Mentor Inga Yanoski says, the pressure of appearance-focused resolutions inevitably sets people up for failure, and in turn, reinforces feelings of unworthiness — making internally-focused resolutions can be a powerful choice. “Characteristics of a ‘healthy’ resolution might include practicing daily acceptance of where you are, just as you are, turning focus inward to the state of your nervous system and mental well-being first,” she says. “‘Healthy’ characteristics might include gratitude, intentional rest, achievable goals that don’t have anything to do with physical transformation or diets. Focusing on joyful movement rather than movement that is coming from a place of  ‘I should.’ A resolution of giving oneself permission to say ‘no’ instead of always saying ‘yes.’”

How to move beyond body-based resolutions this year

If we can agree that weight loss- and appearance-focused resolutions are more likely than not to result in disappointment at best,and trigger or  exacerbate disordered behaviors at worst, how can people (both in recovery and otherwise) go about setting end-of-year goals that will actually help them feel happier and healthier?

Jones believes it may help to initially just switch up the language that describes New Year ambitions. “What I really like to do is set ‘intentions’ for the New Year instead of ‘resolutions,’” she says. “This allows me to view my life in a holistic way and consider how I want to feel in it.

Some intentions might be: ‘I want to heal my relationship to food and body,’ ‘I want to practice deep compassion for myself, or ‘I want to move my body in ways that bring me joy.’”

Yanoski believes the semantics make a big psychological impact. “This takes the pressure off of ‘resolving’ to do something — it softens the rigidity and the rules that come along with a resolution,” she says. (This is particularly important for those in recovery, as rigidity is often characteristic of an eating disorder mentality.)

For those motivated by specific goals, Yanoski says it’s important to set goals that are actually achievable, and to mindfully select some that have absolutely nothing to do with food or appearance. “For example: reading everyday, writing everyday, giving back to the community in some way, starting a new hobby, taking a cooking class with a friend or partner, or traveling more,” she says. “Perhaps taking an activist mindset of intentionally pushing back on the society’s incessant messages of needing to transform yourself. Practice saying ‘I am enough, just as I am right now,’ even if you don’t believe it — say it out loud each day.”

Parks says focusing on a desired feeling rather than a generic “healthy” outcome is hugely important in setting the right personal resolution or intention. “When making a resolution, ask yourself why you're resolving to do it — and when you think you've answered it, ask ‘why’ again,” she says. “So if your answer is ‘to be healthy,’ what does healthy mean to you? Why do you want to be healthy? Maybe it’s ‘I want to be healthy so that I can have the energy to play with my grandkids.’ If it’s ‘I want to drink more water,’ and you say it’s because you want to ‘be healthy,’ maybe what you really want is to feel in control of your health. So maybe that means trying to have a regular sleep schedule, and it's not actually about drinking more water. Figure out what you're really saying and be honest with yourself.” For those who have internalized diet culture values — which, unfortunately, is many of us — it might take a few layers of digging to get to the true intention behind a “healthy” goal. And for those who’ve struggled with an eating disorder, it could also take a conversation with a family member, therapist, or other trusted adult who can help assess whether the goal might play into eating disordered beliefs.

If you’re still struggling to land on a resolution that resonates with you, consider these questions that Seigel says may help reveal what is fundamentally important to you:

“After you’ve taken time to reflect on these questions and get clear on what is important to you, think about the habit or resolution that you want to choose and ask yourself what it has to do with your goals and life direction,” Siegel says. “If there’s no connection to what is important, then it’s not the right one for you at this time.”

While experts advise avoiding any “shoulds” in resolution-setting there’s one exception: at the end of the day (or year!), your resolution “should” be rooted in your true values and inspire feelings of joy, excitement, and inspiration. Body-focused goals don’t take these feelings into consideration, stemming instead from a diet culture mentality that often evokes feelings of shame and unworthiness — feelings that are awful for everyone, and possibly dangerous to those affected by eating disorders. Instead, lean into activities, hobbies, and behaviors that actually enrich your life, your relationships, and your sense of self, goals that are much more likely to stick and that help you evolve into the person you’re striving to be. “Clean slates can be really exciting,” Parks says. “I think it's a real opportunity for us to be introspective, to be reflective, and to look back on the previous year. And it's an opportunity to celebrate, give ourselves grace, and then think about what we want to do next.”