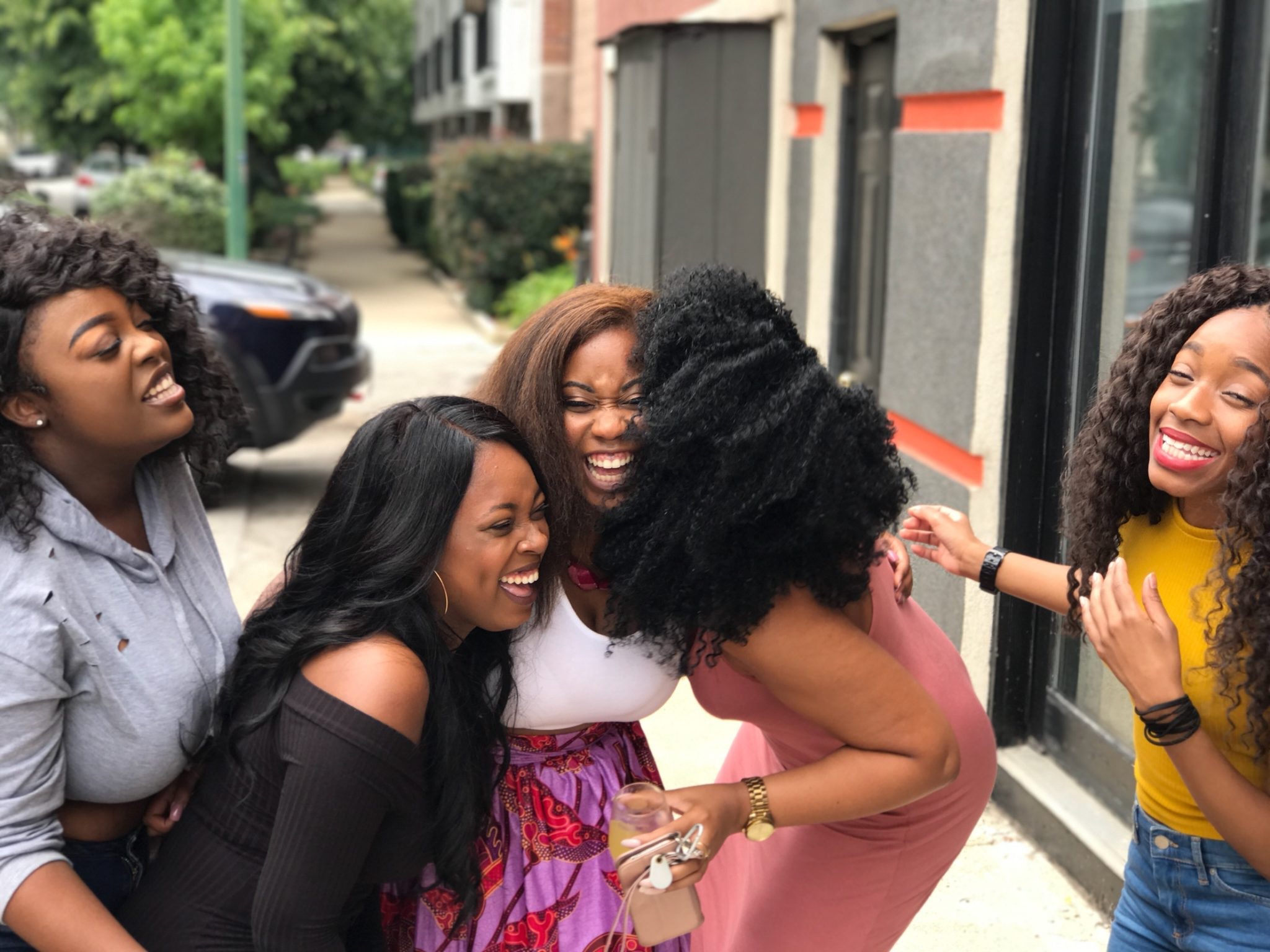 When I first spoke to Stephanie Covington Armstrong almost a decade ago for a story about eating disorders in the BIPOC community, she told me, “I thought I was the only Black person who didn’t know how to eat.”

That feeling of isolation inspired Armstrong to write a book, aptly titled, Not All Black Girls Know How to Eat. “When I was in the midst of my eating disorder, it let me hide in plain sight,” she wrote. “...No one would have looked at my brown skin and been like, ‘That poor thing has a problem.’ It protected me in a way.”

Non-diet registered dietitian and Equip advisor, Christyna Johnson, MS, RDN, LDN, says that in her experience, Armstrong’s relationship to her race as a protective shield is common. “I have found in practice that this continues to be a theme for clients, and in many cases has been validated by a medical or mental health professional,” she says. “Those with eating disorders already deny the severity of what is happening for them, and having professionals who do not have the tools to provide an accurate diagnosis or intervention is part of the complex problem. For many that I have worked with, they receive praise for their efforts that are disordered in nature.”

Armstrong’s book was published in 2009, but according to experts, the problem persists: the vast majority of researchers, clinicians, and even community members still don’t understand how to recognize and treat eating disorders in Black people, and many struggling with EDs fall through the cracks, often never getting treatment at all.

The research that exists on eating disorders in the Black community

“Researching eating disorders in the Black community has been a journey,”Johnson says. “The research is sorely lacking, and many times is written through a white lens. Most eating disorder research, as we know, is conducted at higher levels of care or in university settings where there is less likely to be ethnic diversity. The research that has been published focuses primarily on the prevalence of binge eating disorder and the consequence of body size or the need to manipulate size/weight/shape after one has recovered to reduce the risk of chronic illness.”

To Johnson’s point, perhaps the most well-known research on the topic of eating disorders in the Black community was published over two decades ago. In a 2000 study, researcher Ruth Striegel Weissman found that young black women were just as likely as their white counterparts to report binge eating or vomiting and even more likely to report fasting and laxative and diuretic abuse.

One particular piece of research that has stuck with Armstrong is a 2009 study from the University of Southern California that found Black girls were 50 percent more likely than white girls to have bulimia. “This was one of the most important studies in the past twenty years,” she says. According to the researchers, girls from families in the lowest income bracket were also significantly more likely to experience bulimia than their wealthier peers.

While these specific areas of research have dominated the limited scientific landscape that exists around eating disorders in the Black community, Johnson points out there . “There is plenty of room for research exploring minority stress and the incidence of eating disorders, minority stress in the context of the treatment environment, the impact of media, and the medical interactions individuals encounter in the process of getting a diagnosis,” she says.

Obstacles to care within the Black community

While there may be a lack of substantial research on the topic, we know eating disorders can and do impact Black people in significant and uniquely vulnerable ways. . And even if there were a wealth of studies dedicated to exploring the complexities of eating disorders in the Black community, pervasive cultural stigmas around mental health could prevent people from even admitting they or their family members need help.

“There are many external factors and inequities in health that present obstacles to proper treatment and care,” says Equip advisor, Benjamin O'Keefe. “But it’s also important to look internally. Black culture has largely stigmatized mental health issues as ‘white people issues.’ They aren’t. We are faced with the same societal pressures to fit in, and in some ways, more pressure as we are forced by society to conform to Eurocentric beauty standards. When Black and POC people do seek care, we are less likely to be listened to and believed, less likely to see providers with cultural knowledge — or folks who look like us — and disproportionately less likely to be of a socio-economic class that can afford the astronomically high costs of care.”

Johnson agrees, noting that psychological issues are still considered taboo in the Black community, “especially for masculine folks,” she says. “It's important to eliminate the shame of seeking support in your pursuit of taking care of yourself.”

Biases in the medical community impede diagnosis and care too

Cultural biases within the Black community are only one piece of the puzzle when it comes to understanding why proper diagnoses and care aren’t being delivered. The research that does exist suggests that medical professionals also have misconceptions around who gets eating disorders. A 2006 study found that clinicians were less likely to assign an eating disorder diagnosis to a fictional character based on their case history if their race was represented as African-American rather than Caucasian or Hispanic.

“From a clinical perspective, getting the accurate diagnosis to ensure insurance coverage — which is a privilege in itself — is an important part of the process,” Johnson says. “Getting care for an eating disorder is difficult regardless of ethnic or racial background. This becomes more complex when the treating professionals are unaware of the nuances of existing as a particular ethnicity. It’s not uncommon for the piece of ethnicity and /race to not be talked about as a part of the treatment process, even though it may be a foundational piece of the eating disorder.”

Because of the ongoing lack of diversity in the treatment world itself, Johnson says it can be a struggle for Black people to receive proper, comprehensive care. “Seeking support, particularly at higher levels of care (day treatment, residential, inpatient) can be difficult for Black folks when they are the only person of color in their milieu, or when there are no people of color on staff,” she says. “Minority stress is not discussed enough as a contributing factor to developing an eating disorder.”

If you haven’t heard the phrase “minority stress,” it’s an important concept to comprehend when learning about eating disorders in BIPOC communities in general. According to the American Psychological Association (APA), minority stress is “the relationship between minority and dominant values and resultant conflict with the social environment experienced by minority group members.” It’s a unique, chronic, and socially based form of stress that “members of marginalized groups experience because of the prejudice and discrimination they face,” according to the Center for Community Practice. hen this experience of minority stress is added to general life stress, it can result in poorer health outcomes compared to individuals who don’t experience it.

In addition to overt societal racism, one possible contributing factor to minority stress is the prevalence of microaggressions, i.e. subtle or indirect instances of racism that occur on a daily basis (like, for example, a white person clutching their wallet or purse when a Black person approaches, or a white person telling a Black person “you don’t sound Black,” insinuating that Black people aren’t typically articulate).

“Managing microaggressions as they present themselves over the course of life, leads one to try and develop coping skills,” Johnson says. “This can serve as a maladaptive coping skill in an environment where one is required to be, even if they are being mistreated or feel othered.”

The expectation that microaggressions will show up in the medical system, which is already marginalizing for many folks, may also be fueling hesitancy to seek help. “There is an inherent lack of trust in the Black community toward the medical community, particularly white professionals,” Armstrong says. “That makes it difficult to overcome the martyr complex handed down through generations where the only option is to suffer in silence. Eating disorders are not uncommon in the Black community but they are often closeted or exchanged for other EDs.”

Eating disorders can and do affect all people from all walks of life, and regardless of the research that does or doesn’t exist to document it, Black people absolutely have suffered and continue to suffer from anorexia, bulimia, binge eating disorder, and the entire spectrum of disorders.

“It may be hard to believe in a world as discriminatory as ours, but eating disorders don’t discriminate,” O’Keefe says. “Eating disorders are not racist, but the institutional exclusion and lack of resources around eating disorders in BIPOC people certainly is. It’s only when we broaden our understanding of who is impacted by eating disorders and mental health issues that we can begin to create treatment and advocacy programs that reach everyone who needs them.”

Armstrong believes that to truly help Black individuals with eating disorders, the medical community needs to adapt general protocols to the specific nuances of the community. “Treating Black women with ED’s with the same methodology as white women negates their inherent difference and needs,” she says. “EDs are often a trauma response and who has a longer history of trauma in America than Black women? So it should be assumed that we also have a long history of EDs. The ‘strong Black women’ trope that has been normalized by the mental health community is continuing to kill us. It is terrifying to unpack trauma, so without the financial resources and emotional support inherent in rich white communities, our issues will continue to fall under the radar leaving the most vulnerable among us, isolated and alone.”